Edwin McLaren, of Bridge of Weir, was jailed alongside his wife Lorraine in 2017 for £1.6m fraud scheme.

Prosecutors are seeking more than £5 million from a fraudster who was convicted after Scotland’s longest ever criminal trial.

Edwin McLaren , 54, now faces the prospect of having to hand over more than £5.3 million to the Crown under proceeds of crime legislation.

Prosecutors previously sought £1 million and then £3 million from McLaren, of Bridge of Weir. 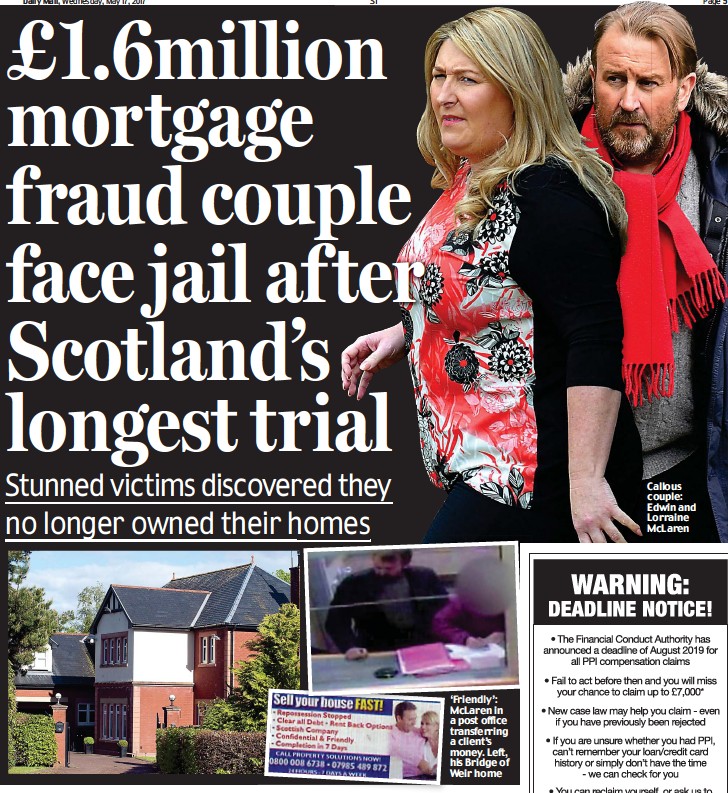 But now the Crown has revised the figure being sought from McLaren.

The dad of two, who was jailed alongside his wife Lorraine, accused prosecutors of incompetence during a hearing at the High Court in Edinburgh yesterday.

He said: “The figure has now reached £5 million.

“When I was convicted, it was £1 million.

“The people who are doing this don’t know what they’re doing.”

McLaren was jailed for 11 years in 2017 for his involvement in a £1.6 million property fraud scheme.

He was found guilty of 29 charges after a trial at the High Court in Glasgow that began in September 2015 and heard evidence over 320 days.

His 54-year-old wife Lorraine was found guilty of two charges involving a fraudulent mortgage application on their own home and money laundering involving a sum of £128,000.

During his trial, a court heard how McLaren preyed on vulnerable people by arranging for their title deeds of their homes to be transferred to his associates without the victims’ knowledge.

The estimated cost of the 20-month trial was £7.5 million.

Jurors heard of the couple’s lavish lifestyle which included luxury holidays in Dubai and spending £100,000 on a ring and private schools for their children.

McLaren, who drove a Bentley, was described by trial judge Lord Stewart as showing “breathtaking dishonesty”.

The fraudster left victims out of pocket and in some cases homeless.

At a hearing last month, McLaren told Lord Arthurson that prosecutors were seeking to seize his £800,000 home in Bridge of Weir.