Fast fashion has a bad reputation among environmental campaigners who accuse it of fostering a wasteful culture.

But leading chain Primark has hit back at its detractors, saying shopping on the High Street is better for the planet than buying online.

The boss of AB Foods, Primark’s owner, told the Times that its efficient global supply chains meant it was less polluting than online delivery vans.

However, George Weston’s assertions are questioned by energy experts.

Mr Weston told the newspaper: “Far from being a problem, we are a solution.”

He said Primark, which does not have an online shop, had “one of the world’s best supply chains”.

“We don’t air freight the goods, we ship them, which has far lower emissions,” he added.

Mr Weston said delivery vans “puffing their way up and down a street” were more damaging than people collecting products in-store, which was “more environmentally sustainable”.

He dismissed concerns that Primark was selling disposable clothes, saying his customers were not “buying them to wear just once”.

The retailer, which has about 2,500 staff, is in restructuring talks with landlords in another sign of the High Street crisis.

A spokeswoman told the BBC no decisions have yet been made.

Clintons was responding to reports on Sunday that it wanted to close 66 out of 332 shops, with landlords slashing rents on most of the other stores.

The restructuring would involve a controversial scheme known as a company voluntary arrangement (CVA), an insolvency process that allows companies to continue trading while pushing through closures and rent cuts.

A Clintons spokeswoman said “discussions are continuing with our landlords but no decisions have been made”.

But she declined to comment on a Sunday Telegraph report that the company told landlords 90 of its shops were loss-making and that sales were expected to continue to decline.

British maternity chain Mamas & Papas has reached out to administrators as part of an effort to stem losses in a ‘pre-pack’ deal with administrators Deloitte, resulting in six store closures in the UK and dozens of job losses.

The struggling retailer is the second babycare brand to call in administrators this week after rival Mothercare announced the closure of all 79 of its UK stores on Tuesday. 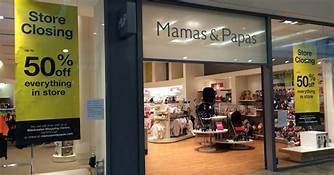 The ‘pre-pack’ deal between company owners Bluegem Capital, which acquired Mamas & Papas in 2014, and administrators Deloitte aims to cut store losses by selling off assets to other companies within the Mamas & Papas Group.

A further 54 jobs are at risk as the store looks to “review and simplify” operations at its head office in Huddersfield.

The company says its 26 remaining stores will continue to trade as normal and online orders are unaffected by today’s announcement.

Riccardo Cincotta, Executive Chairman of Mamas & Papas, said: “These actions are always difficult but they are also necessary in a challenging market to ensure Mamas & Papas achieves its considerable future potential.

“We remain fully focused on maintaining our position as the UK’s most popular nursery brand.